King Lear and Our Autumn with No End 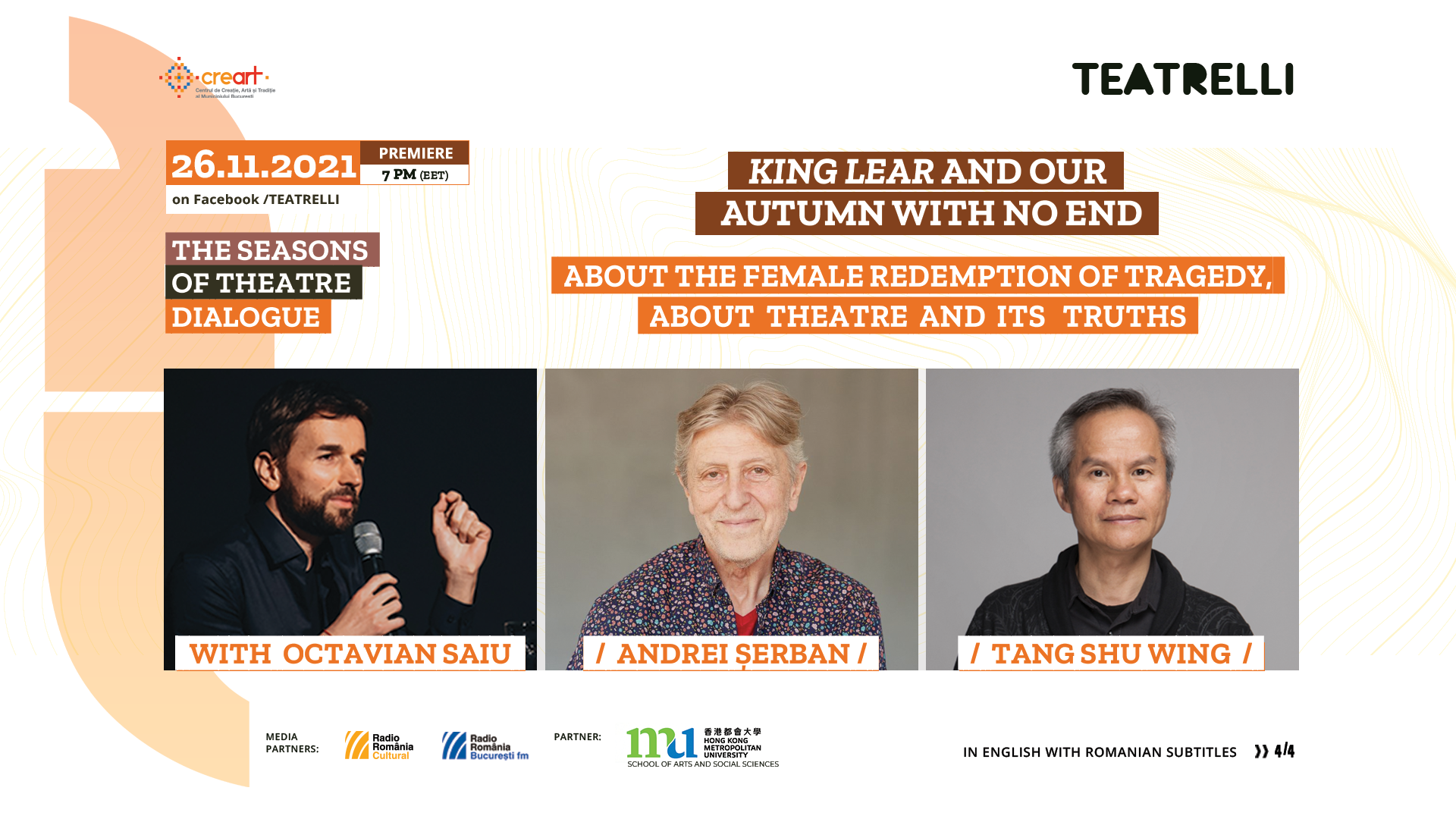 About the Female Redemption of Tragedy, about Theatre and Its Truths
With Andrei Serban and Tang Shu Wing
King Lear is Shakespeare's darkest play. Today, when read, it appears to be the final verdict applied to a world devoid of metaphysics. When staged, it becomes both the requiem of this world, and the bitter contemplation of its impossible salvation. With amazing poetic expressiveness, Andrei Serban created his Bucharest version with an all-female cast: a show that cannot be forgotten, a theatrical poem dedicated to the greatness of women and to their ways of uttering the most painful truths about the human condition. More recently, in Hong Kong, a major Asian theatre director crafted a performance based on Lear only with women, and without a word. Silence is for Tang Shu Wing what words remain for Serban: the essential source of theatricality, as well as its chance to regenerate itself.
In a sad autumn, which for some on our planet seems with no end, you are invited to listen to two of the most important artists of these times. They will talk about the stage, about Shakespeare, about Lear, but also about what terrifies us all: the hidden tragedy of existence. You are therefore invited to a special encounter devoted to theatre across, and beyond borders with Andrei Serban and Tang Shu Wing. It is indeed a special chapter of our seasonal theatrical Dialogues.
Octavian Saiu
＝＝＝＝＝＝＝＝
Premiere: 27 Nov, 1am (HK Time)
Link: https://www.facebook.com/teatrelli/
*Conduct in English with Romanian subtitles
＝＝＝＝＝＝＝＝
Andrei Serban is widely recognised as one of the most impactful theatre and opera directors of the twentieth century. He was a Professor and the Head of the Acting Programme at Columbia University in New York for 27 years, and he has taught at many other universities in the world. His stageproductions created in several different countries have featured names like Meryl Streep, Billy Crystal, and PlacidoDomingo. He is an Obie Award Winner, a Guggenheim Fellow and Rockefeller Foundation Fellow.
Tang Shu Wing is considered Hong Kong’s major contemporary theatre figure. His works have been presented at multiple festivals around the world, such as World Shakespeare Festival and Sibiu International Theatre Festival. He is a former Dean of the School of Drama at Hong Kong Academy of Performing Arts, and recipient of several titles and awards, amongst which the Medal of Honour by HKSAR in 2020 and the Award for Outstanding Contribution in Arts by the HKADC in 2021.
Octavian Saiu is an award-winning theatre critic and scholar. He has a PhD in Theatre Studies and another one in Comparative Literature, as well as a DHab (Higher Doctorate) in Performance Studies. He has been constantly teaching at various universities around the world, and has been involved in numerous global cultural events such as Edinburgh International Festival and The Theatre Olympics. He has authored twelve books on theatre, and is a Knight of the Order of Cultural Merit of Romania.